From the October issue of the Mammoth Real Estate Times.

Q: For years we’ve been hearing about the Baby Boom generation and the influence they will have on places like Mammoth, especially on real estate. But for now we are not seeing much of that influence in the local real estate market. Was it for real or was it all hype?

A: Economists began predicting years ago that the baby boomers would have significant impact on resort towns like Mammoth–the result of “the granddaddy of all demographic shifts.” Massive birth rates in the United States following the end of World War II created the “boomers”. The front-end of the boomer generation are just hitting sixty years of age. The back-end boomers are in their mid-to-late forties. The economists also observed that people hit their maximum spending peaks in the late forties and late fifties. So combining the waves of birthrates and peak spending, the most significant portion of the “Great Boom Ahead” is scheduled between now and 2010.

I recall the Intrawest annual reports of the mid 1990’s pointing to this phenomenon as a key driver in the growth of resorts. In fact it was the major premise of their financial strategy and planning. (Observe; the “old guys” of Intrawest are selling the company and “new guys” are buying at a hefty price. The future will tell us who was smarter.) Much of the planned growth and investment here in Mammoth has been founded on the expectation of this population trend. In essence, resort communities will be the new retirement communities for the more active, healthier and financially sound retiring boomers.

But plenty of things have happened along the way. Besides the economic shocks of the tech bust, 9/11, wars, hurricanes, and more, the real estate market is currently in a comatose state following a period of frenzy due to incredibly (and artificially?) low interest rates and historically liberal lending. Most of the economic predictions couldn’t foresee these events. The frenzy also made some of the boomers buy earlier than they had planned, while others delayed their purchases.

And the boomers themselves have made some unanticipated changes. The retirement concept has changed. The boomer generation has changed economically, socially, and physiologically. Economically, many boomers got caught up in the spending habits of the past few years–and hence have to work longer. There are concerns over pensions, Social (In)Security and healthcare costs. But more significantly, many of the most successful boomers are now experiencing a new concept; instead of the golden handshake, many are getting what is referred to as the “golden handcuffs.” Many of the first wave of boomers are simply too valuable to their employers or the economic systems that they serve. They are being offered more and more money to stick around. Their knowledge and experience is impossible to replace–at least for now while there is still economic growth. And “just a little (or maybe a lot) more” is enticing to those on the brink of retirement or semi-retirement.

Socially and physiologically, 60 years old is the new 50, and 50 is the new 40. Many of the recreationally oriented boomers who are attracted to Mammoth aren’t feeling nearly as old as their parents did at the same age. And even if they are financially ready to retire, they aren’t emotionally ready. For many, there is the “What do we do now?” syndrome. Recreating all day and drinking fine wine all night isn’t likely to be fulfilling for most. Many of them think (fooled?) they have another twenty good years to make turns–and the new skis haven’t hurt the perception.

So with these delays, what can we expect? This past May the results of a large study on boomers commissioned by the National Association of Realtors® was released. The study shows that the boomers still have a big appetite for real estate. But the study’s results say that nearly two-thirds of boomers say it costs too much today to truly retire and never work again. And 38 percent say that their present, pressing financial needs mean they give little attention to financial planning for retirement. Quoting NAR President Thomas Stevens, “Many baby boomers are simply too busy to give much thought to planning for retirement…many just see themselves ‘going’ for as long as they can.”

NAR’s chief economist, David Lereah commented, “Some boomers will take advantage of generous capital gains exclusions from their taxes when they sell their primary residence, and then they place themselves in the position of being able to convert a vacation home into their new primary residence which would later become eligible for the same tax treatment. Then, if their need change in the future, they’ll be able to take the capital gains tax break after they have lived in that home as their primary residence for two out of five previous years. It becomes a great way to build and protect a nest egg.” That sounds like a financial strategy we’ve talked about before.

Some of the other interesting responses to the study; three out of five boomers said their idea of the perfect location to retire is in a rural area or small town. And “if money were no object”, access to quality health care (38%) is more important than being on a golf course (4%). “Ideally, they would like to live in a rural area with access to quality health care. One question is how many areas actually offer those kinds of amenities in that kind of environment,” Stevens said. (Anyone looked at all the construction going on at Mammoth Hospital lately?)

So what does all this mean? The boomers are still coming–some of them are just coming a little later than expected. The Great Boom is going to be leveled out and prolonged. And some are going to, or should consider, striking greater “wellness” by using the current primary residence tax regulations to their advantage, especially if they can play their Mammoth home (or future Mammoth home) into the strategy. That makes me even more bullish on properties that have more live-ability–like single-family homes and larger town homes.

This reminds me of the joke, Why did God create astrologists? To make economists look good.

Meanwhile, here’s wishing plenty of wellness to all the boomers–plenty of fresh air, High Sierra sunlight and recreation generated endorphins.

To Buy or Not To Buy? That is the question.
I Got Me A Doublewide. 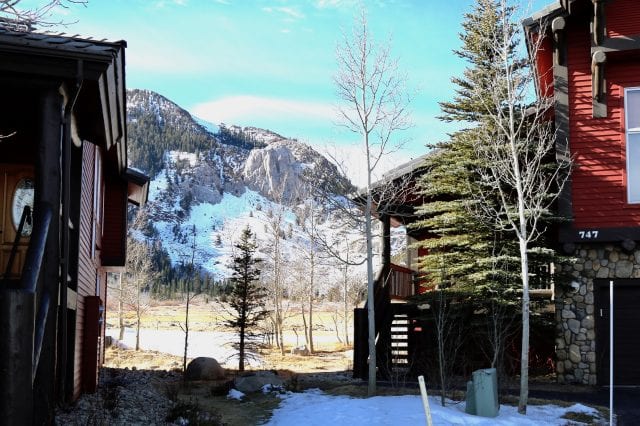