The Drought Continues Through a Crowded President’s Weekend!

The  Mammoth Lakes MLS is reporting 19 real estate closings in Mammoth for the period ranging from a low of $235,000 to a high of $1,250,000. Of the 19 closings, 17 were financeable properties and 11 were conventionally financed. The sales included 14 condominiums priced at $460,000 or below. There was one (1) REO closing. The 10-Year Treasury rate was watched closely during the period but only settled slightly higher than two weeks ago. We’re also watching the Federal Reserve to see if they continue with their planned rate hikes. Mortgage rates have moved up but most 30-year quotes are still under 4.5%. 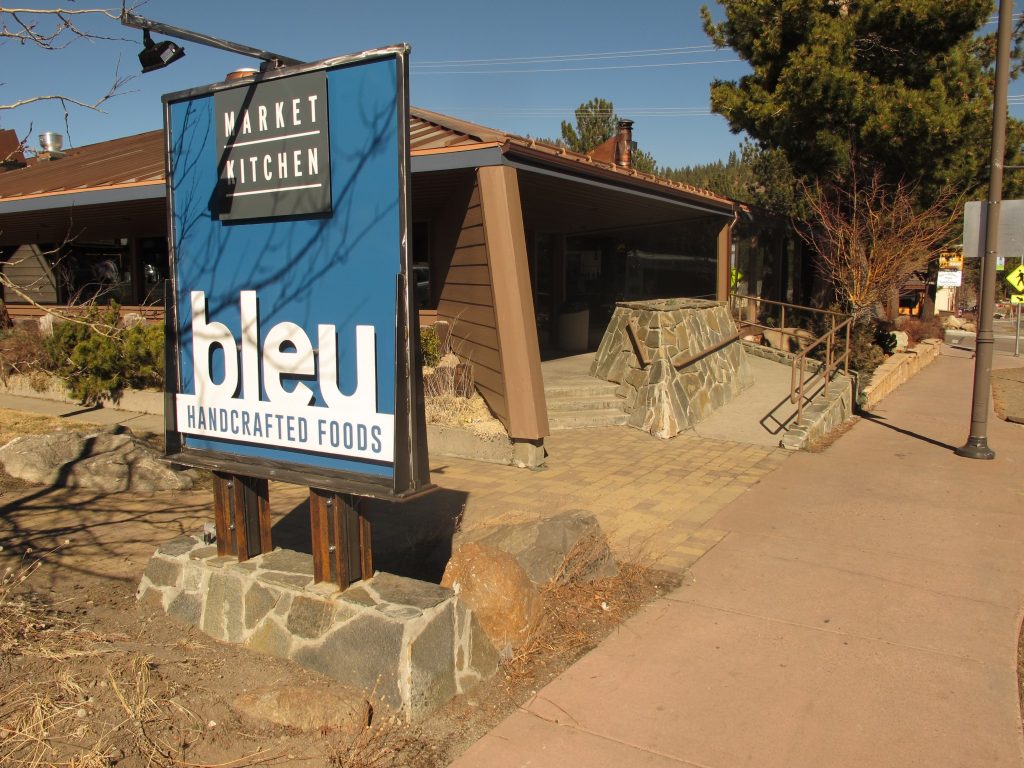 At the period’s end the condominium inventory is up three (3) to 61. There were 21 new condo listings in the period and seven (7) are already under contract and in escrow. It is an unusual time of year to see so many new condo listings but clearly there are owners/want-to-be-sellers who are taking advantage of increased prices, low inventory and strong buyer interest.

The weather has cooled in Mammoth but the snow conditions remain dismal. But that did not deter a big crowd coming for this President’s Weekend holiday. There are snow showers in the long range forecast but the Sierra needs some major storms. There are some very cold temperatures forecasted for the next few days and beyond and some may get caught off guard and experience frozen plumbing issues. Even though it hasn’t felt like it, it is February. And a truly odd scene; Town crews were crack sealing on local roads two weeks ago, a job that would have been impossible a year ago.
Besides the ongoing Winter Olympics, the biggest ski industry news during the period is that Rusty Gregory was named the CEO of the new Alterra Mountain Company. Indeed, as I pointed out last May, Gregory was a big player at the table. This may or may not be good for Mammoth. It might be an indicator that the company may function in the future more like a private equity firm. But stay tuned. I’m already working on a new Broker’s Report on the history of Mammoth Mountain under different types of ownership. In the last 35 years the only period where profound improvements were made to either the Ski Area and Mammoth’s resort real estate were during the control of a publicly held company (Intrawest).
Three of the most desirable vacant Village hotel locations/lots came to the market during the period. And they were all placed in the Mammoth MLS (which is quite unusual). All three are at the corner Main St. and Minaret. Is this telling or simply coincidence?? The two downhill corners are known as Mammoth Crossing. These two lots are listed for a small fraction of what they sold for in the heyday. Up until a couple of years ago there was an abandoned motel on the east corner — thank God that is gone.
The uphill corner is the “Dempsey” corner where Nevados restaurant is and also includes the original Woods Site that was the primary venue for the Jazz Jubilee for many years (tons of memories there!). A telltale of how long it has been owned under the current ownership; the property’s tax roll assessment is $377,000. It is listed for $6,000,000. It likely would have sold for $10’s of millions in 2004.
​​​​​​​But it is odd that the lots came to the market in the past two weeks. Could be (probably is) coincidence. All things considering the land is quite cheap. But the super high cost of construction in Mammoth makes it almost worthless. The local Realtors will have to keep working the condo hotel prices up. Until then buying these lots are a long-term investment.
The Bishop Airport dealings took a slightly bizarre twist; now it appears Mammoth Mountain wants Bishop to become the primary airport for Mammoth’s air service. We’ve been through 20 years of Rusty Gregory bullying his way to the current status and now they are making an about-face. I remember sitting through  public meetings where Gregory was advised by pilots that the airport improvements should be in Bishop; that Bishop is FAR more reliable and the runways are already there. The brains at Alterra must have figured it out, that reliable air service is the key to Mammoth’s future (for them) and Mammoth Airport will never be reliable (even with global warming). But then they just made Gregory their CEO….For all the people who think the new ownership will be a godsend, don’t set yourself up for disappointment.
Fannie Mae is going to explore allowing homeowners to include Airbnb rental income as part of their income for a re-finance application. Fannie Mae announced this past week that they are doing a 90-day trial with three lenders. So far this program is just for primary residences and it is the first time Fannie Mae has allowed income/rents generated within the borrower’s home. The key is that Airbnb can verify the income. So Fannie Mae is embracing the gig economy. One of the lenders is Quicken Loans so the program should be widely accessible. If successful it could have some interesting ramifications for the second home/vacation markets. We’ll see.
While Mammoth Lakes continues to fumble around with their marijuana future, the city of Aspen is reporting that in 2017 marijuana sales topped alcohol sales within the community and marijuana sales were up 16% over 2016. The 2017 marijuana sales totaled $11.3 million and alcohol sales totaled $10.5 million. Of course the city also reported $29.4 million in “luxury goods” sales. There was no mention of what the Aspen Institute thinks of these sales numbers….
The old Charthouse building is once again making people happy with food and beverages, Bleu Handcrafted Foods Market & Kitchen opened last week. Bleu’s small store on Main St. has been very popular the past few years and they have been operating The Eatery at Mammoth Brewing. But now they have moved into the iconic building on Old Mammoth Road. They will be featuring all kinds of wonderful items including a bakery, butchery, lots of cheeses, a salad bar, hot foods and a full bar. I see lots of visitors making it their “go to” spot to grab-and-go meals.
And the rumor is that the old McDonald’s building at the entry to town will become a large Starbuck’s. And the Grocery Outlet site is graded but they are waiting for better weather(??) and contractors. Looks like the commercial revitalization is already happening.
The June 5th Mammoth Town Council election was opened up for official nominations this past week with three seats up for election. So I thought I would get the ball rolling with a Real Estate Q&A column in the weekend’s issue of The Sheet. It never hurts to remind the local people how important the second homeowners are.
And lastly, Mammoth’s hosting of the Gran Prix right before the Winter Olympics, and NBC television covering both events, resulted in numerous visual representations of the Mammoth region during the Olympic coverage. Excellent free advertising.

Two Westin Monache Studio units closed during the period and even though they are very similar floorplans the selling price difference was $64,000. Why? The higher priced unit was on the top floor (7th floor). The lower priced unit was on the second floor, which for all intents-and-purposes is the bottom floor and right at the pool/spa level. Interesting to note; when Intrawest sold most of these condo hotel properties (including the Westin) they originally placed a $10,000 premium on each additional upper floor. So here we are 10 years after the property was new and that pricing difference is still holding up in the market.
Condo sales at Mountain Shadows, Discovery Four, Sherwin Villas, San Joaquin Villas, Mammoth Creek, Hidden Valley, Meadowridge and La Vista Blanc all showing continued strength in the low end of the market.
The brand new modern “spec” home on Rusty Lane closed for $1,250,000 or $370 per square foot. This is a beautiful modern home selling in a marginal neighborhood. It will be interesting to see how the gorgeous wood exterior holds up to Mammoth’s sun, dryness and winter weather. Rusty Lane is a street of only a could hundred yards below Lower Forest Trail. It is NOT named after Rusty Gregory. According to Mammoth old timer Stan Hudec, who subdivided that area, he named the street after a golden retriever that belonged to his heavy equipment operator. The dog was killed while running around a piece of grading equipment and buried on the spot. That would have been around ~1959. Stan told me the story in 1991 before his passing. 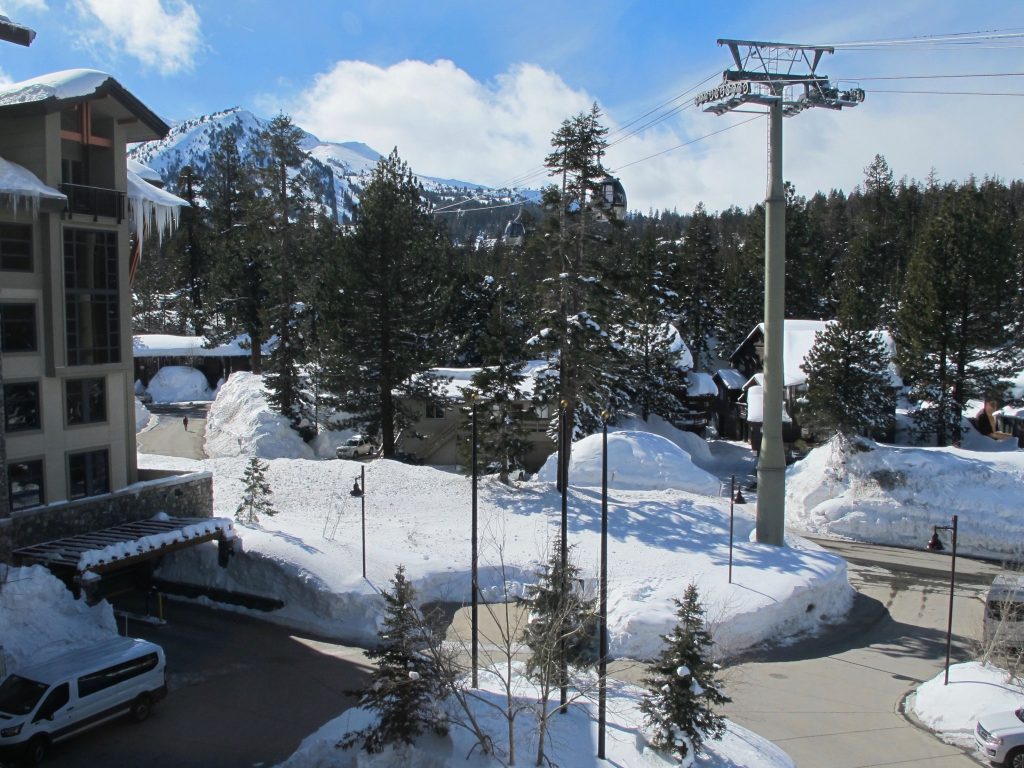 This one really stumped me!! There were a couple of really attractive condos that came to the market but they have already sold. There are a couple of new Westin Studio units in good locations but their prices are skyward and that cuts down the ROI that most buyers are looking for in the Westin. There are a couple of new Snowcreek Phase 4 and 5  2 bedroom + loft properties but those just don’t seem to be real popular with buyers right now — the entry stairs just don’t seem to appeal to buyers right now. The other new condo listings are ho-hum or carrying BIG price tags.
The two new residential listings include a re-list of the ~7,000 square foot home in The Bluffs that has been on the local market for a couple thousand days in the last 10 years and a new low-priced relic in the Slopes. Somebody will probably buy that but it certainly isn’t a Favorite!
The photo above is looking out the window of the Westin one year ago — tons of snow on the Ski Area and in town.
​​​​​​​Check back in two weeks!!

Last week’s Mono County Assessment Appeals Board meeting had two Prop. 8 reduction stipulations on the agenda. I was surprised. I thought we had worked our way through these. But obviously not. These were for assessment dates of Jan. 1, 2017. The market has moved up since then and the Assessor will likely be moving these values back upward on the upcoming roll. On a Prop. 8 reduction the Assessor is not limited by the 2% increase, so the new assessed value can jump substantially (that will be the next round of complaints).
The next day I was looking at some of the details of newly listed property. The property had been purchased by the current owner back in the mid 2000’s. The assessed value for this property was good $200,000 more than it is worth today or last year. So there are still owners that are over-assessed. But if the market continues in this direction, that could change.
And I hit on a couple more revelations in the new tax reform. While the state and local taxes (aka SALT) are now capped at $10,000 thus limiting the value of deducting property tax on the Schedule A, owners of rental properties can fully deduct (expense) property taxes on their Schedule E. That works for many of Mammoth’s condo owners who do nightly or long term rentals. And it may push some non-renting second homeowners into a new rental scenario. We shall see.
And I had an informative discussion about the SALT changes with someone who looks a hundreds of tax returns every year. He said the new tax reform will not change the “net” taxation for most high income people, including those in California. While tax reform capped the SALT deduction it also did away with the Alternative Minimum Tax (AMT) that kicked in for most high income earners. He said the changes will be a “push” for most.
So for now Mammoth is experiencing a steady stream of buyers and sellers, and tax reform hasn’t done anything to change that.
Thanks for reading!