Beautiful Weather In Mammoth But The Reality of a Drought Winter Has Arrived.

The  Mammoth Lakes MLS is reporting seven (7) real estate closings in Mammoth for the period ranging from a low of $257,500 to a high of $950,000. Of the seven closings, all seven were financeable properties and all seven were conventionally financed. And all seven were condominiums. One year ago there were 14 closings in the same period. Conventional financing rates are bound to change upward with the 10-Year Treasury climbing to 2.85% by the end of last week. That is a four year high and the pundits seem to think it will climb higher. 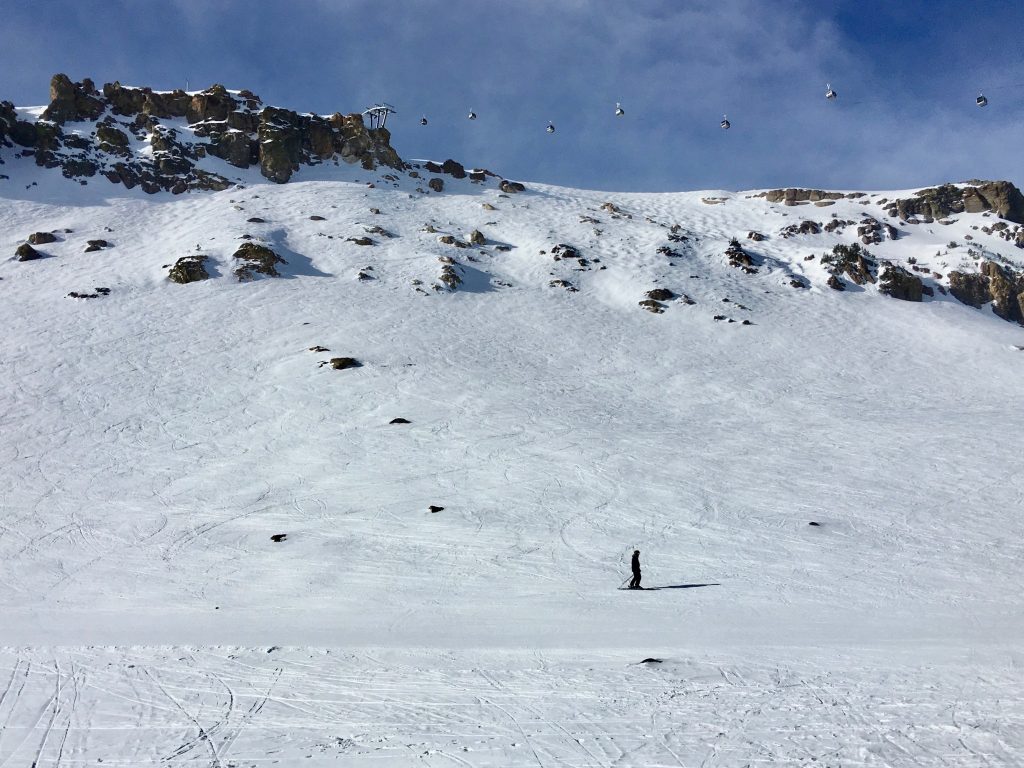 At the period’s end the condominium inventory is down five (5) to 58. There were 18 new condo listings in the period and six (6) are already under contract and in escrow. Condos in “turn-key” condition are selling quick. Condos with big asking prices are not selling. This time last year there were 114 condos on the market.

The inventory of single-family homes is up three (3) to 32. This time last year there were 44 homes on the market.

The total number of properties in “pending” (under contract) in Mammoth Lakes is up 11 to 63 at period’s end. Of the 63 properties in “pending,” there are 49 in “Active Under Contract” status (formerly “back-up”). The total number of pendings in the aggregate Mammoth MLS (which includes outlying areas) is up 23 to 84. So the stats show that sales have increased after a slight January lull (which is historically normal). Last year the pendings were 33 and 62 respectively. But last year everything was buried.

The most common thing heard around Mammoth the last two weeks is “What a difference a year makes!” Last year we had too much snow with more coming. In some cases it became emergency conditions. And if you were actually able to get on the Ski Area and some operating lifts, the conditions were amazing. But not this year. Although there is plenty of time left to see some major snow events, Mammoth is clearly in a drought weather pattern.
The weekend crowds continue to come but the ski conditions are “hard and fast” with thin coverage. (Beware of out-of-control skiers and snowboarders.) There is no snow in the forecast leading up to President’s weekend and the annual Ski Week. And temperatures are barely cold enough to make snow. The Mountain trail crews will keep the runs as skiable as possible but it will become a real challenge at some point. But they are the very best at optimizing what they have.
Many local residents are tuning-up their bicycles. And for many new condo owners, they can get an early start on their remodeling projects. I’m hoping for a March like we had in 1991. That would be nice. The condo projects and commercial properties have spent almost nothing on snow removal (the pre-Christmas storms were rain at most of the town level). So the overspending of last season will be balanced-out this year.
The lack of snowfall has yet to have an overall economic impact (unless you are in the snow removal business). The storms Mammoth has experienced have had excellent timing. The last 60 days have seen solid tourism in Mammoth. Even though the local economy is more well rounded in 2018, the December/January period is still prime time. It pays the bills. And this past January was the busiest January for real estate that I can recall. Meanwhile, we will enjoy the great weather and pray for snow.
Mammoth’s new overlord Alterra Mountain Company announced their new ski pass offering for next season called the IKON Pass. This should rival Vail Resorts wildly popular Epic Pass. The big announcement lacked any sort of specific details that everyone hungers for; no pricing, restrictions (blackouts), etc. There is conjecture about how it may operate. In the world of RFID, passes could potentially have all sorts of options. Many people I’ve talked to don’t really care about the Epic-style limitless pass, they just want to ski Mammoth, and maybe June. Some like the idea of a California pass that would include the four Mammoth resorts and Squaw Valley and Alpine Meadows. Personally, I like the prospects of a limitless pass — I need to do some market research in other Alterra resorts.
But I’m sure Alterra is doing their homework. Quite frankly I’m surprised the existing pass holders haven’t been surveyed yet, but that may be coming. And in the past drought years they have thrown the pass holders “a bone” of some sort. Or maybe some first year discounting like the original Gold/MVP passes. I guess we’ll just have to wait and see.
A couple other interesting ski pass related items; Telluride has not been acquired by Vail Resorts but the Epic Pass will now give skiers and riders seven days of access at Telluride with no blackout dates. This could be a very appealing trend in the industry and may give a clue as to some of the ways the IKON Pass will operate. Also, Mammoth offered something completely new by introducing a new “monthly membership” program. For $99 per month (X 12 months) members receive a Cali4nia Pass good at Mammoth, June and Big Bear and a Mammoth Bike Park Pass and unlimited use of the coworking spaces at The Fort. They are calling it the “Work + Play Membership.” Clearly, new things coming in the season pass realm.
The Town front has produced nothing profound but there is continued progress on making improvements at Bishop Airport. There is encouragement from the FAA and that is critical. We learned some 20 years ago that the FAA has substantial funding available in the “rural airport fund” and those grants are typically 9 to 1 matching grants; meaning the local government only needs to fund 10% of the total costs of these airport improvements. Bishop Airport (located east of the downtown area) was a C-130 base in World War II and has three runways that can accommodate major aircraft and is flyable almost every day of the year.
Also, the Main Street property owners and redevelopment wonks met a couple weeks ago and saw a reworked version of the plan, this time agreeing that a “phased approach” is the way to proceed. Maybe they finally figured out how delusional they have been with the previous revitalization vision.
Owners at Mammoth Creek Condominiums were served litigation/eminent domain paperwork this past week. One specific owner called me to tell me the process server caused quite a ruckus at his home in San Diego. Apparently the Town and the Mammoth Creek HOA Board have come close to an agreement on the bike path easement through their property but the last sticking point is the lighting the Town intends to place on the path and additional street lights on Old Mammoth Road.

Minimal sales to discuss but closings at Mountain Shadows and Viewpoint show increasing values for 1-bedroom units.
A sale at St. Moritz shows that buyers will even purchase horrible locations in this market.
Snowcreek I  2-bedroom + loft units continue to bring increased prices.

The “Modern Mountain Craftsman” style home became popular in the mid-2000’s and they continue to be very popular. All of the recent Graybear homes built in the Sierra Star golf course are essentially this design theme. Here is one located in Old Mammoth overlooking the Valentine Ecological  Reserve.
This home was completed in 2007 and features 4 Bedrooms and 3.5 Baths, an oversized garage, large great room with locally milled wide plank flooring, large soaking tub and steam shower in the master bath, private spa and mud room entry. Large south facing deck. Views to Mammoth Mtn., the Sherwins and Glass Mtns. Almost 3,000 square feet of living space. A truly beautiful home.
​​​​​​​Listed at $1,280,000​​​​​​​

The new tax reform continues to bring revelations. One I just discovered could be of great benefit to owners of nightly rental condos here in Mammoth. It falls under the IRS category known as Section 179 deduction. Anyone who has owned a business is probably familiar with Section 179. It allows capital expenditures to be fully expensed in the year that they are made rather than placed into a multi-year depreciation schedule. It works well when a business has a solid or exceptional revenue year. I know I utilized it effectively a few times back in the 2000’s.
But the new tax reform has now applied the Section 179 deduction (expense) to both non residential AND residential rental properties. So not playing tax advisor, this should mean that owners of Mammoth condos on nightly rental programs will be able to expense (write-off) major improvements in the year that they make them. So banner rental years will allow owners to make the improvements and expense the entire cost in the tax year. This could be a benefit for major items like kitchen and bath remodels, heating upgrades, furniture and decor upgrades, and potentially HOA special assessments.
The full impact and ramification of this tax change hasn’t really sunk into my head quite yet, but it could work very well for many Mammoth rental owners because some years are better than others and those years could warrant making some upgrades to the property based on the tax benefit. Also, Mammoth rental owners are a bit transient themselves — not really looking at 30-year investment periods. So the ability to immediately deduct expenses rather than some long protracted depreciation schedule is appealing.
And a recent Wall St. Journal article highlighted the use of broker price opinions, or BPOs in the real estate and investment industry. Congress outlawed the use of BPOs some time ago for traditional mortgages (like those owned by Fannie Mae). But bulk investors have used the shortcut appraisal process to value properties that serve as collateral for many Wall St. investment vehicles.
Many of these BPOs are generated by firms in India who use Zillow-type algorithm data to value properties. Sometimes they hire a local agent to verify information (last week, I and several agents in Mammoth were hounded by a company to do a BPO on a June Lake property, they wanted to pay $25 — that won’t even pay for gas and a beer at JLB). Ultimately, many of these BPO values are not reliable. The margin of error can be extreme. And these shaky valuations establish the collateral value for billions of dollars in Wall St. real estate transactions, bonds, etc. Shades of 2008 all over again.
Thanks for reading!