Cool Weather and Rain Dominate, But Mammoth Will Green-Up Beautifully!! 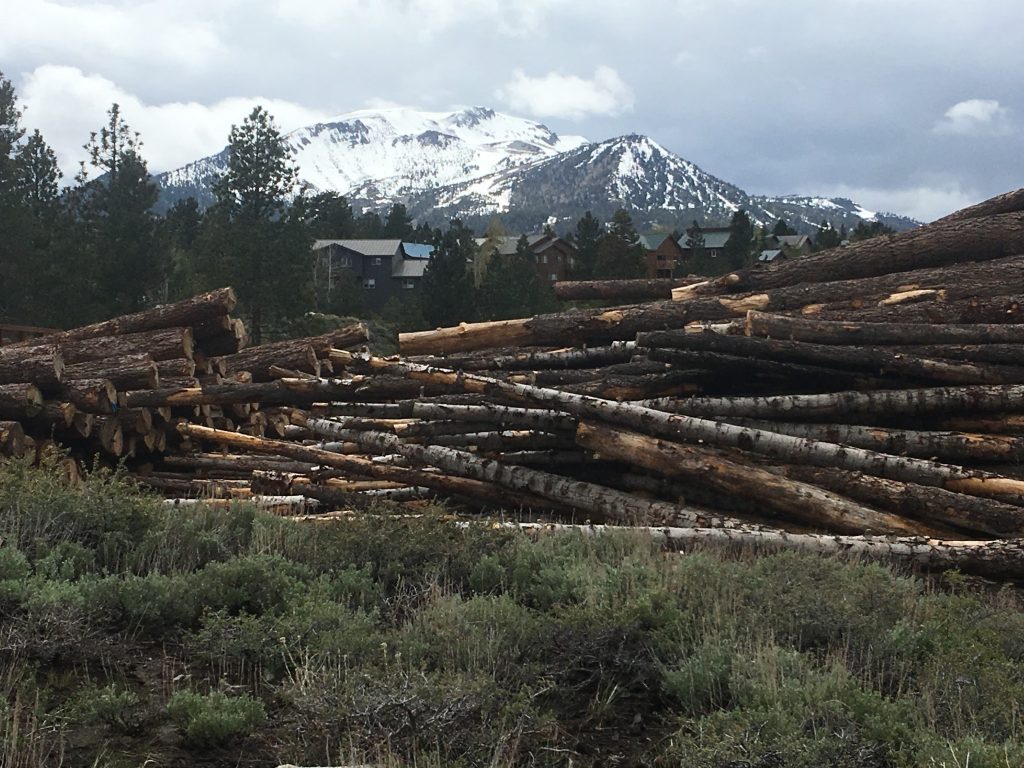 This will be a slightly abbreviated report because I’m heading out on vacation. The  Mammoth Lakes MLS is reporting only seven (7) real estate closings in Mammoth (as of Friday 5-25) for the period ranging from a low of $265,000 to a high of $1,400,000. Of the seven (7) closings, six (6) were technically  financeable properties and four (4) were conventionally financed. The 10-year Treasury pushed over 3% for almost the entire period but settled lower at the end of the period. However, 30-year conventional mortgage rates continue to push near 5%.

At the period’s end the condominium inventory is up 10 to 74. There were 24 new condo listings in the period and seven (7) are already under contract and in escrow (ironically, the exact same as the period before). The increasing inventory continues to indicate we may see a “normal” build in inventory through the late spring and summer. That would be healthy for the market.

The inventory of single-family homes is even at 33. The least expensive home in Mammoth is now at $439,000 and I’m sure it is getting plenty of attention. It is a dilapidated small home (1,059 square feet) in the depths of Old Mammoth. I’m sure somebody will want it. I’ve owned homes (and lived in them) in proximity of this property. This area gets challenging in big winters. Perfect place for a “mountain man” or a summer oasis.

The total number of properties in “pending” (under contract) in Mammoth Lakes is up nine (9) to 60 at period’s end. Of the 60 properties in “pending,” there are 30 in “Active Under Contract” status (formerly “back-up”). The total number of pendings in the aggregate Mammoth MLS (which includes outlying areas) is up 18 to 111. But 19 of those are low-end (< $150,000) lots and “cabins”  scattered in the eastern Sierra.

Mammoth’s weather has been downright chilly and wet the past two weeks. But the rain will turn a drought winter into a green summer, at least in the short to medium run. The only people who seem inconvenienced are the contractors with open roofs and framing. The Ski Area announced it will remain open until June 17 and perhaps longer.

The biggest announcement of the period was that Alaska Airlines will discontinue air service to Mammoth Airport as of November 30 of this year. They claim that the shortage of pilots and the eventual “mothballing” of the Q400 aircraft are both to blame. But the immediate reaction by Mammoth skeptics (there’s plenty of them) is that this is a contrived move to ram the Bishop airport process down our throats. The Q400 was always considered the ideal aircraft to fly into Mammoth because of the passenger size (~70) and it’s ability to fly in altitude and foul weather.

With Alterra wanting future air service based in Bishop, that is where it is heading. But many obstacles lie in the way. And the soon-to-be newly elected public officials will have to deal with this, and rather quickly. What will happen at Mammoth Aiport?? The planned terminal expansion is all but history. The general aviation, which has been increasingly busy the past few years, will certainly continue. But making commercial air service at Bishop happen will be the new challenge. The new ski resort conglomerate will push hard but this time they will have to push on both Mammoth and Bishop.

There is lingering opposition but not to the extent of the past. The FAA grant dollars flowing from their rural airport fund will certainly be available. The biggest challenge appears to be how Mammoth Mountain and Mammoth Lakes fund capital expenditures and subsidies in an entirely different county. I’m sure they’ll find a way. This would also mean a new transportation system shuttling passengers to-and-fro Bishop. And what about back-up lodging during big storm periods where flying into Bishop is fine but getting into Mammoth Lakes is compromised?  And how will the JetSuite charters fit into the whole program? I guess it is all logistics. Hopefully it will all become logical. Good luck.

Ironically, 20 years ago the majority of private pilots who were based in Mammoth or were frequent fliers into Mammoth, all recommended the commercial service be based in Bishop. I know, I was there. We’ve been through development agreement negotiations, endless planning sessions, litigation including years of delay caused by the Sierra Club, the Hot Creek litigation and settlement fiasco, outright “bullying,” and on and on. Now we’re back to square one. And many of those private pilots are long gone (or dead)…. And a soon-to-be ex-Council member wonders why the community has PTSD over the airport???

The local elections are next week and there is no obvious front runner. What is apparent around town is a high degree of frustration with the existing Town Council. Community members believe they have simply rubber stamped everything the staff has come up with. And the staff recommendations aren’t in line with what is best for the community. This happens in a town where everybody is working, spending time with family and friends, and of course distracted by playing in the great outdoors….

I’ve been talking to potential sellers and other agents in the past two week and I have noticed something a little different; current owners of Mammoth real estate who plan to sell are interviewing multiple local agents. In some such instances, they have personally (face-to-face) interviewed four separate agents before making a decision. Others are doing similar interviewing over the phone. And I’m sure they are selective about who they interview in the first place. While this is prudent for sellers to do, I have never witnessed the number of sellers going through this process in this market. Often, owners have some sort of “relationship” with an agent for various reasons. Personally, I’m all for it. I’ll gladly compete with other agents in town. Heck, almost half the agents in Mammoth have worked in my brokerage at one time or another. I know what they are about.

On the flip side, there is more evidence of buyers willing to make “blind” offers in this market. Making these offers based on some less-than-quality photographs in the MLS is sketchy. It can easily become “a waste of time.” In my case, I at least go out and produce a good video of the property for my clients. It is important to see what the street view is up-and-down, and how the property flows, etc. Those are perspectives you can’t get through still photography. And buyers can make other mistakes in a market like this, so here is my Real Estate Q&A that appears in this weekend’s issue of The Sheet.

Work has begin on the old McDonald’s at the entry to town and it is being converted to a corporate owned Starbucks. Starbuck’s has been in the news over their new open restroom policy which purportedly will create homeless havens in their facilities. So is that what will happen in Mammoth?? Really a perfect spot (being facetious) at the entry to town and across from the entry to Shady Rest Park and the squatters forest. On the other hand the new police station and courthouse are right there. And the hospital too. This could be an interesting mix. I vote for some webcams.

Work on the new Grocery Outlet continues; they’re sure putting a lot of dollars and effort into the infrastructure, but a building should emerge soon….

If you click on the link above to read my latest Q&A you will see that the thinking about optimal locations is changing here in Mammoth. Not only for personal usage but for rental too. So here is a new condo listing that has super easy access to the downtown Old Mammoth corridor but is also right on the Red and Green line shuttles. Tons of convenience and flexibility.
This is a 2 bedroom +loft / 3 bath (full baths) townhome at Mammoth Sierra Townhomes. And the parking is right out in front. This is an end unit for extra windows and light and adjacent to the common spa. The third full bath on the main living level is a real plus. Downstairs is like two master bedrooms. There is side-by-side washer/dryer hookups downstairs. Similar units in the project have been remodeled and reconfigured providing lots of future options. Newer roofs and siding. Low HOA fees. Propane gas is available to the unit for heating, etc..
Listed at $459,000
Courtesy of Mammoth Realty Group

Anyone who knows or follows me has figured out that I am not a fan of fractional properties. I simply don’t consider them to be real estate, and certainly not an investment. Like timeshares, they are “easy to get into and difficult to get out of.” My websites produce leads for these fractional properties on a regular basis and I simply send them on to the listings brokerage. Sometimes I get calls from people inquiring about them; I have told many perspective purchasers that “the money spent should be money you can easily afford to lose.” Some don’t like to hear that, but it is the truth. It used to happen more often when the properties were offered to the public as nightly rentals.

Mammoth has two fractional properties; 80/50 in the Village and Tallus/Obsidian on the Sierra Star golf course (off of Meridian Blvd.). The Tallus property was assembled out of different parcels including one I had listed back in 2004. I was told then that I “better get on board” with fractional sales because it was the next big thing in resort real estate. I balked and chose to stay at the dock.

Just a few years later during the Hot Creek/Mammoth Airport trial, the valuation for the development land at the Airport was based on a hypothetical fractional hotel project behind the west hangars. That is where the 10’s of millions of dollars in valuation came from (and subsequently the massive settlement). At the same time both fractional properties in Mammoth were already in receivership (aka bankrupt). Based on those facts, Mammoth’s legal counsel didn’t adequately cross examine the expert witness and all of his extrapolated value. Ultimately that was the central disaster of the airport debacle. All thanks to the disaster known as fractional properties and the obscene profits that can produce IFthey are successful. That is a big IF.

And the most recent chapter is a Mono County tax appeal hearing of just last week. The 80/50 HOA apparently bought-out the balance of the unsold shares (after 10+ years) in the project. The project has gone from developer to receivership to another owner and to another owner, etc. over the years (too many to keep track of). So here they were appealing their assessed valuation. After an intense amount of number crunching (the project is a conglomeration of fractional units with varied fractional usages) the Assessor and the HOA came to an agreement on a new assessed value. The assessed value was already in decline, but the Appeals Board shaved almost another $10M off the value.

Unfortunately, Mono County really can’t afford to lose the ~$100,000 in annual property tax revenue. This is the only property I see in Mono County that is going down in value. But that is what you should expect when you play in the fractional realm, or at least that’s what I’ve been saying for years.

Thanks for reading!   I should return in three weeks.