February 2019 Goes Into The Record Books And March Looks Wet! 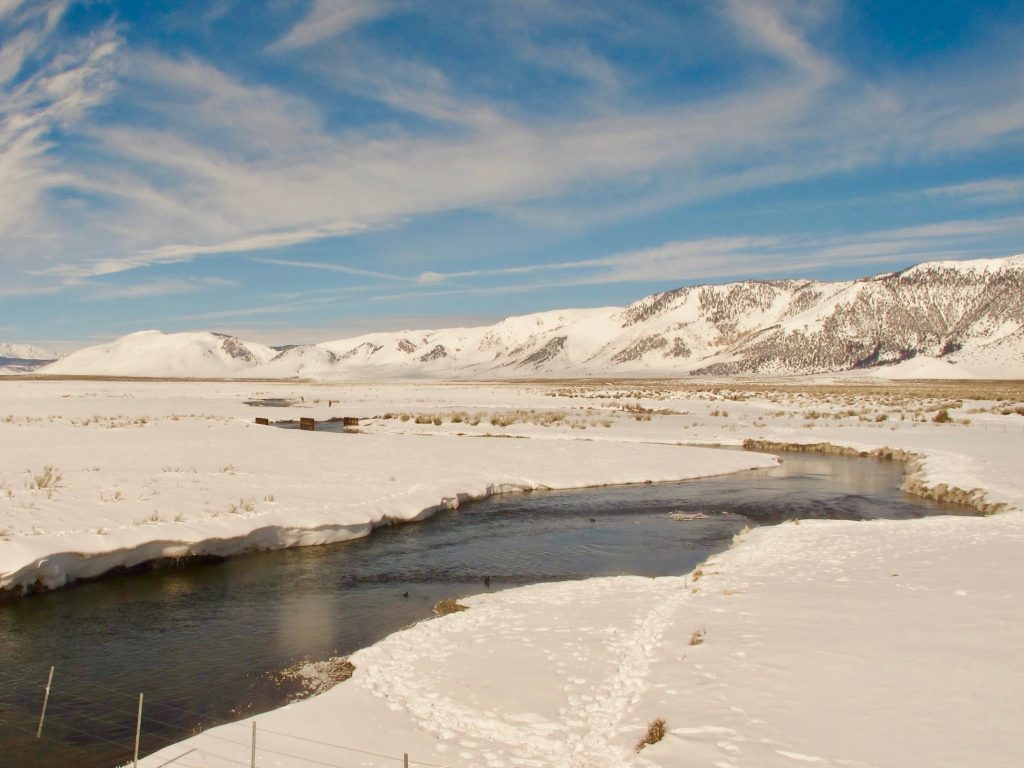 The Mammoth Lakes MLS is reporting 19 real estate closings for the past two week period ranging from a low of $295,000 to a high of $1,580,000. Of the 19 escrow closings, 18 were financeable properties and 14 were conventionally financed. That includes two condo hotel properties that were conventionally financed. Just a year ago they would not have been to qualify for attractive financing. The closings for the period are back to a familiar theme; 13 condominium sales under $500,000 and three (3) residential sales over $1M. The 10-year Treasury yield moved slightly upward to 2.755%. This time last year there was an identical number of closings.

At the period’s end the condominium inventory is down nine (9) to 94. All of the new snow, as it usually does, creates interest in the local market. But the stormy weather has inhibited some real estate activity; many potential buyers simply don’t make it to Mammoth, don’t want to go out into all the snow, or are wore-out from exceptional ski days. There were 11 new condo listings to the market and none have sold yet. This time last year there were 89 condos on the market.

The total number of properties in “pending” (under contract) in Mammoth Lakes is up two (2) to 50 at period’s end. Of the 50 properties in “pending,” there are 23 in “Active Under Contract” status (formerly “back-up”). The total number of pendings in the aggregate Mammoth MLS (which includes outlying areas) is even at 68. This time last year there were 59 and 89 respectively. But unlike last year the aggregate number does not include any cheap mobile homes or funky rural lots.

February 2019 was record snowfall month for many western ski resorts including Mammoth Mountain. If the month had been 30 or 31 days it may have been an all-time record month. There is plenty of snow on the ground here in Mammoth and the Ski Area has incredible coverage. Having spent some time on the road both south and north of Mammoth in the past two weeks I can say that the snowpack in the Sierra is quite impressive. The lakes, creeks and rivers will be brimming this summer.

There were more brutally cold temperatures during the period but warmer temperatures have returned the last few days and in the long range forecast. And there is plenty of precipitation in the forecast. Snow removal operations have been less taxed recently but a massive volume of snow has been trucked out of town during the period.  And a substantial number of roofs have been shoveled. But so far there doesn’t appear to be the damage like 2017 caused. We’ll see. Winter isn’t over.

Between snow, wind and ice, Highway 395 has been a mess with big rigs and RVs blown over, collisions and more. The road has been closed both north and south at various times and detours can be challenging. Coming home from Bridgeport last week had me detoured through Yerrington and Hawthorn in Nevada. It only took an extra three hours. We were lucky. Others had to spend the night in various locales.

The IKON Pass blackout dates are certainly impacting visitor traffic in Mammoth. The President’s weekend crowd is normally crushing. But this year under the blackout it was rather tame. Instead the following weekend (last weekend) hosted the major crowd. Ski Area officials reported that Saturday (Feb. 23) was their biggest day of the year so far for skier numbers. The U.S. Gran Prix comes to Mammoth this next week featuring the world’s best freestyle skiers and snowboarders. This nationally televised event is a giant marketing opportunity for Mammoth Mountain and the super pipe and jumps are built and ready. The Mountain backdrop will be spectacular; the runs and coverage rarely gets better than they are now. We’ll just hope for some decent windows of non-stormy weather.

Next year’s IKON Pass details were trotted out during the period with some minor price increases. Both the full pass and the base pass have $20 increases for renewal. Newcomers will be charged another $50 over this year’s rate. The blackout dates and overall structure of the passes appear similar to this year. I don’t think the price increase will deter anybody. But anybody who paid the “walk-up” rate this year (ranging from $149 to $189) has to be considering purchasing a base pass. Especially considering the pass is good at Big Bear and a whole host of other great resorts. It will be interesting to see the increase in sales. For anybody thinking of going skiing, the IKON base pass is great deal. Bloomberg produced a recent article about the IKON Pass and Vail’s Epic Pass.

After all of the heavy snowfall I have been engaged in some home-versus-condo discussions. All properties need attention after major storms and cold temperatures and high winds. Single-family homes can often require significantly more work than many condos. It is simple economies of scale. And today most of the condo projects are managed efficiently by larger management companies with big crews. Condos offer what I have referred to for years as the “walk away amenity.” It makes it easy for second homeowners. Most single-family second homeowners do employ some sort of absentee management service. But it is less seamless than owning a managed condo. I know the recent winters of 2011 and 2017 moved some long-time local residents from single-family homes into condo ownership. I would imagine the winter of 2019 will do the same.

Zillow Group reported its 2018 financial results during the period; real estate agents in North America paid Zillow $898,000,000 to be placed on their website as premier agents, an increase of 11% year-over-year. But despite that success, the company sees its financial future in buying and selling homes and originating loans. If I was a stockholder I would be concerned about how much the term “non-GAAP” is used in their financial reporting.

A home in the Starwood subdivision (in the Sierra Star golf course) closed for $1,185,000. This home (and the same owner) has been on-and-off the market for well over 10 years and with at least five different listing agents. Probably ~2,000 days on market (DOM). But this is a small trend in the Mammoth residential market; properties with high DOM finally selling.

Westin Monache #708 closed for $325,000. This top floor oversized Studio has to be one of, if not thebest Studio units in the Westin; top floor, larger floorplan with expanded kitchen and living space.

Sunstone #329 closed for $488,000. This 2 bedroom / 2 bath condo hotel unit has a top floor location but a panoramic down valley view. And close to the stairwell for immediate ski run access. 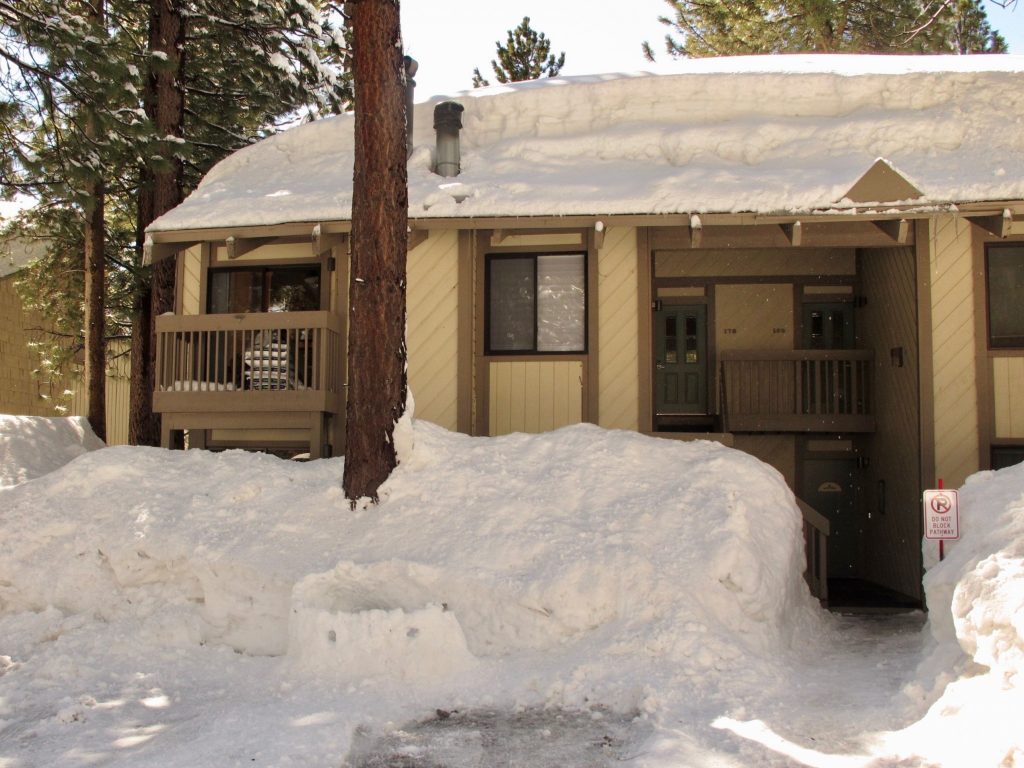 Well here is a brand new listing that somebody will want. This is an older condo in a solid rental project and the heavy remodel work has already been completed down to new plumbing and electric.  This is a 2 bedroom + loft / 3 bath condo located in the Horizons Four project on Meridian Blvd. just uphill from Old Mammoth Road. The project has a nice pool and spa area (and this unit is close) which makes it especially good for nightly rental.
The property features beautifully remodeled kitchen and baths and a pellet burning fireplace. There is also a washer and dryer in the unit. This property is ready to use and/or produce income. The HOA fee is reasonable. The location is close to the major shuttle lines, VONS, theaters, shops and restaurants. This is excellent for all seasons.
Listed at $499,000
Courtesy of Resort Property Realty

The Mono County Assessment Appeals Board conducted hearings the past two weeks for an appeal of Mammoth Mountain’s 2012-2016 tax assessment. There were plenty of sidebars to this appeal but the Ski Area is/was looking for Prop. 8 relief for those drought years because of the loss of net income. Both Mammoth and the Assessor had their own specialized counsel and co-counsel and specialized appraisers. And there are some technical legal issues that may have pushed the Board’s decision into the courts. At least that was the threat. At question are a few million dollars in property taxes.

With commercial appeals the burden of proof is on the taxpayer. So MMSA made their presentation first including a 400 page appraisal including detailed financial analysis and a ski industry valuation consultant from Denver. That took the better part of two days. After some cross examination, the Assessor’s appraiser spent most of a day presenting his case. The volume of information, “assumptions” and estimates of capitalization rates was rather incredible. But trying to value a diverse asset like MMSA is not easy. The open market sales of the past make it somewhat easier (this is the second time I have been involved with a MMSA appeal).

On the fourth day of hearings the parties found some enlightenment and after hours of negotiating came to an agreement on valuation. It will have to be settled and signed at the Board’s next regularly scheduled meeting on April 24. And there is still a small disagreement about the Tamarack Lodge valuation, but I believe that will be settled. The settlement will ultimately save the County and MMSA any further legal and consulting fees (which were piling up). The County will eventually refund a substantial amount of already collected taxes back to MMSA. Apparently the County has already set aside monies in anticipation of the refund. The refund displaces dollars that could flow to Mammoth’s districts; school, fire, hospital, etc.

I will be discussing some of the other aspects of this appeal in future newsletters and blog posts. One thing that is really fascinating is the local precedent for Prop. 8 reductions of assessed commercial values based on lower net incomes caused by drought or lean economic times. All of the newly acquired commercial property owners may want to pay attention.

There has been conjecture floating around this settlement that Alterra Mountain Company may be looking to go public sometime this year. An unsettled tax appeal would not be good in the SEC filings. A bountiful winter for Alterra’s resorts and strong IKON Pass sales this spring could make it an opportune time. But I have have no information that an IPO is imminent.

And one quote from the Assessor’s appraisal was a good summation of MMSA’s standing in the ski industry, “Total gross revenues regularly hitting over $100 million is a very respectable achievement in the industry and only the top caliber large destination resorts can achieve this high volume. The subject achieves this level of business because management has properly balanced and maximized all its revenue centers and created the kind of ski environment attractive to a mass quantity of skiers. This suggests that excellent management skill has come to bear influence on the subject.”

Another thing that stood out is that MMSA annually pays out about $45 million in salaries and wages in the local area.

And to put it into an interesting perspective, the total disputed amount over five years of tax payments is about equal to what the Town of Mammoth Lakes generated in TOT (bed tax) in January…..