This Real Estate Q&A appears in the Bluesapalooza Weekend(August 1-4) issue of The Sheet.

“It is difficult to get a man to understand something when his salary depends upon his not understanding it. “     Upton Sinclair

A: I always find it valuable to revisit this subject. The Mammoth region, earthquakes and real estate have had quite a relationship over the past four decades. But a few decades is nothing compared to a million years or so. The topic conjures up all kinds of memories and ideas. It is not a subject to be taken lightly but there is also a reality that is worthy of discussion. And the thousands upon thousands of years of vulcanism and geologic activity in this territory is what makes it so spectacularly beautiful and interesting.

Since the recent Ridgecrest/China Lakes quakes I’ve heard several long-time local residents comment that we “need” to have some seismic activity here in Mammoth. Their reasoning is to “relieve some pressure.”  But quite frankly, some might be shocked if it actually happened. While our favorite earthquake monitoring websites are always showing low level activity in the Mammoth/Long Valley Caldera region, we really haven’t experienced major quakes in the past 20 years.

Many of Mammoth’s newer residents (and second homeowners) haven’t experienced a significant earthquake or swarms (and what will many of these east coast transplants think when we do?). And many of the public officials and community leaders of today haven’t experienced these episodes either. Are they prepared? In the early 1990s, the “whisper” amongst community leaders was to always keep your gas tank half-full. It wasn’t a joke. It was tough because most of us were broke from drought and recession.

Growing up in SoCal I remember the 1971 Sylmar quake and the widespread destruction, and the iconic photo of the freeway overpass that pancaked a car and its occupants. My most vivid earthquake memory in Mammoth happened in the early 1980s while I was standing in the middle of the Charthouse (where I was a waiter). The restaurant and bar were packed with an after-ski crowd. The building moved back and forth violently. I can still hear the stacked dinner plates rattling loudly. The lights went out and the broiler bar in the middle of the restaurant exploded into a massive ball of flame as the seismic shutoff valve pushed all propane out of the line. It wasn’t a good night for tips.

In the later 1990s when my old office on Old Mammoth Road got its first Internet connection, we could watch the Cal Tech earthquake reporting in almost real time. With the swarms of smaller quakes at the time we determined that when the Ski Area’s big, chained-up Bluebird buses that rumbled down the street were equivalent to a 3.1-3.2 earthquake.

The Mammoth and Long Valley Caldera area is one of the most monitored and watched geologic areas in the world. It alone provides job security for a host of geologists and random bureaucrats. A vast matrix of lasers has been in place for years to measure every infinitesimal bulge or depression. The latest revelation in 2018 is that there is 240 cubic miles of molten magma underneath us.

Everywhere you look or go in the region there is some textbook example of past volcanic or earthquake activity. It is like a geology textbook in real life. A major research article from last year explained the “deep fluid pathways” of magma underneath Mammoth Mountain and the subsequent release of carbon dioxide. Go up to Horseshoe Lake in the Lakes Basin and you can see the evidence.

The Mammoth community is still stigmatized by the events following the Mount St. Helens eruption and a series of local ~6 magnitude earthquakes in 1980. The “fake news” of that era reported on the Mammoth earthquakes but showed footage of Mount St. Helens blowing up. They repeated the footage almost every time there was an earthquake in the early 1980s (remember, this was pre-Internet). Most people believed Mammoth actually blew up. Many in the public still believe that. People occasionally ask about the devastation. But it didn’t happen. The worst devastation was to Mammoth real estate values. And one could argue that they are still impacted.

Some of the older brokers from the 1960s and 70s who worked in my company over the years often referred to the USGS as the “United States Guessing Society.” They felt that the USGS overreacted on the heels of Mount St. Helens and the earthquakes here in Mammoth. They felt it was about job security.  And more people died in the 1971 Sylmar quake than died in the Mount St. Helens eruption. Clearly, living in L.A. can be dangerous.

In 1980 Mammoth Lakes had some of the highest real estate values of any mountain resort community in North America (have the Aspen folks finally connected the dots?). Mammoth’s unique beauty, the isolation, other assets including climate and nearby demographics all make it  very special in the mountain resort industry. Mammoth Mountain Ski Area and the skier/snowboarder base of SoCal is admittedly the financial jewel of the new Alterra conglomeration.

But the negative publicity in 1980s has tarnished Mammoth for decades. A few recessions haven’t helped, but the stigma of those events still linger in the minds of many. The famous geologist David Hill who has overseen the Mammoth region for decades admitted in a private presentation a few years ago that the USGS and the government simply “had no protocol for how to alert the public of potential dangers.” The USGS was winging it. Do they have any protocols today?

And in the years since we have seen the Bay Area and Los Angeles suburbs decimated by earthquakes (I remember my parents slept in their car on the street for a week in 1994 — they were afraid to go back into the house for any prolonged period.) But today the real estate values in those areas are as high as they have ever been. Real estate memories seem to be short, except perhaps here in Mammoth.

Unlike so many other areas in California, the earthquakes in Mammoth have caused very little damage (and we hope it stays that way). Insurance payouts have been minimal if at all. Part of the reason is the construction quality of the buildings. Mammoth buildings are designed for snow load. And most have been built since 1970. And built out of wood. It is amazing to think about what the local structures have been through between snow, ice, wind, earthquakes and more. And sometimes all at the same time. The modern structures are strictly engineered for snow load and seismic activity. It is one of the reasons it is so expensive to build here.

After this last episode of quakes in the Ridgecrest area the local insurance agents report that they saw a surge in earthquake policies written in the Mammoth area. These policies typically have a 20% deductible. Many of the local HOAs have earthquake insurance, others do not. It is a Board decision. I always remember one prominent insurance agent in the 1980s telling me that if an earthquake knocks a building down, “just light it on fire.”

After the swarms in the late 1990s and the strong market activity into the early 2000s, I came to the conclusion that most buyers of real estate in Mammoth Lakes were more concerned about other things than potential earthquakes and volcanoes in Mammoth. Most had to do with negative influences in their own surrounding metropolitan areas. And in the past 20 years these concerns have only worsened. Today it is an unspoken driver of many purchases in this community. Life in the city has become full of threats and trade offs.

And one is the recurring theme of the “big one” in their own backyard. Just last week it was reported that NASA was intensely flying their “sniffer” 3-D radar aircraft over both the San Andreas fault and the Cascadia volcanic chain including Yellowstone. They can now measure even the slightest movement with this equipment. But are there any protocols for alerting the public to any danger? Or is this just more noise from the alternative media crowd? It is tough living human lives relative to geologic time.

So far the Ridgecrest/China Lake quakes haven’t been correlated to or impacted Mammoth. Most of us didn’t even feel them.  And maybe some “pressure” relief would be desirable. Or maybe some quakes would some scare people out of town and help solve some of our workforce housing crises (just like big winters do). What some increased quake activity might do to local real estate values this time around is anybody’s guess. There are just too many dynamics at play including getting the maximum value out of one’s IKON Pass.

In the meantime don’t let your gas tank get too empty (or your Tesla battery charge get too low). Keep some emergency supplies like food and water around. And don’t forget to appreciate all of the awesome geologic features that are staring you in the face while you are spending time in the Mammoth region. 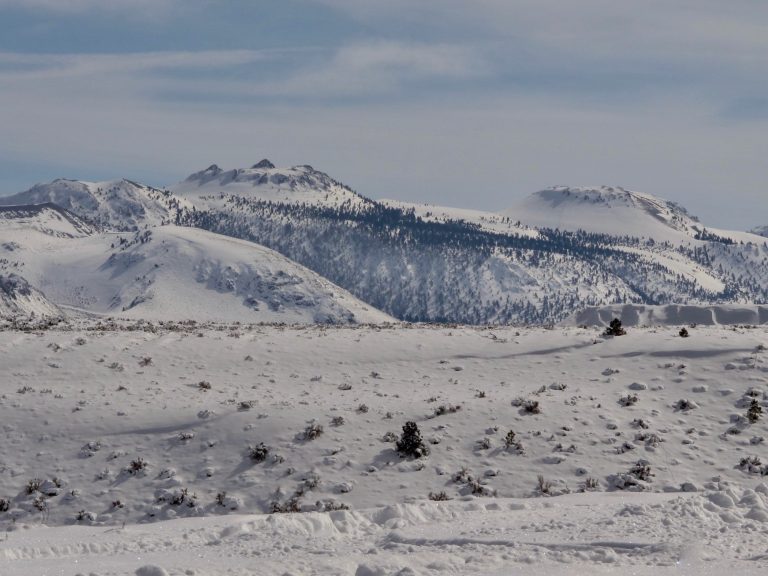