4th of July Period is Marked By Large, Manageable and Civil Crowd!! 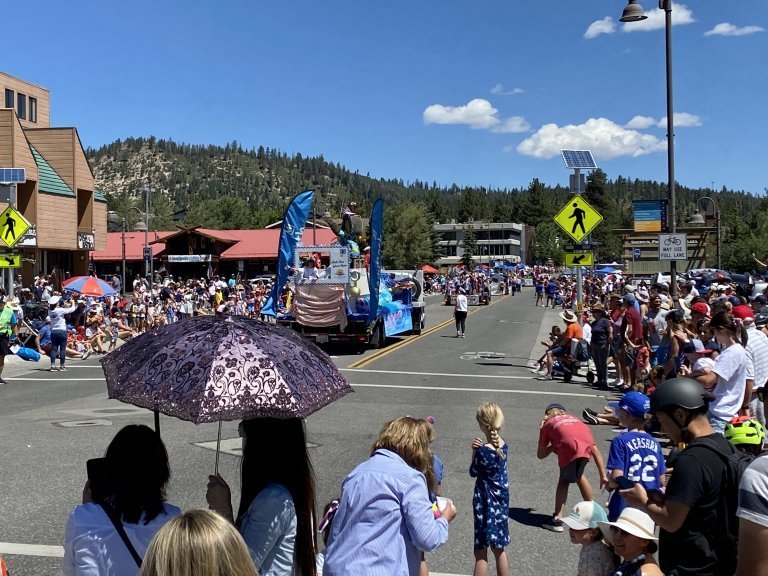 The Mammoth Lakes MLS is reporting 13 real estate closings for the past two week period ranging from a low of $449,000 to a high of $2,400,000. Of the 13 closings, a total of 12 were financeable properties and nine (9) were financed closings. Closings were down below the normal range for the period but this may not continue. There is a smattering of new listings throughout the inventory spectrum and now that the summer tourism is in full swing there are bound to be solid sales. The demand has not gone away. There were five (5) condo closings in the period from $450-700,000. This has been the most active segment of the market in the past 12 months. There were two (2) residential sales above $2M. This part of the market remains active. There was one (1) more vacant lot closing.
The 10-year Treasury yield ended the period almost even at 1.431%. Mortgage rates remain super attractive. Based on how quickly new preliminary title reports and escrow instructions were issued this past week, the escrow/title part of the industry has unburied itself. The past 12 months have been a double whammy of high sales volume and high refinance volume. Some of the more popular inspectors are still booked two-to-three weeks “out” and appraisers appear to be catching up (although they appear to be getting picky about assignments). I’m guessing this summer will be busy, but nothing like the crush of last summer.

At the period’s end the condominium inventory is up three (3) to 51. There was no real surge of listings ahead of this holiday weekend (which would be the norm). There were 20 new condo listings brought to the market during the period and six (6) have already gone to escrow. Looking at recent condos sales and values compared to the peak in values of 2006 continues to be an interesting study. There is tremendous disparity between different segments/projects of the condo market. I’m going to go into a deeper discussion in the “Other” section below.

The inventory of single-family homes is up six (6) to 20. This includes eight new listings in the last five days. Local residents and second homeowners are both seeing the opportunity to liquidate, including some just “rolling the The inventory of single-family homes is up four (4) to 24. There were nine (9) new listings in the period including two (2) under $1M. The $1 to 1.5M price range remains very hot. Properties that would have sat on the market for months in the past with little interest are now selling rather quickly. Local residents and second homeowners alike are taking advantage of the strong market __ they are selling. One interesting thing about many new listings; looking at the tax roll data a significant number of these owners (now sellers) purchased in the 2005-07 timeframe and paid very similar prices to where they are now listed. It is almost like a big psychology experiment. People hate the thought of selling real estate for less than what they paid. But that has been the status for the past 15 years. So now is the time to save face. Makes me wonder what will happen the next 15 years?

The total number of properties in “pending” (under contract) in Mammoth Lakes is up 15 to 105 at period’s end. The total number of pendings in the aggregate Mammoth MLS (which includes outlying areas) is up eight (8) to 14. This tells me the Mammoth market is already moving into action. Historically the Mammoth inventory builds this time of year and peaks around Labor Day weekend, and then the “pre-winter” selling begins. But there has been no norm the past 13 months. Today’s buyers need to know what they are looking for. And wait attentively.

The level of “normalcy” in Mammoth continues. Almost at a level of amazement. The large Motocross crowd moved in and out of town without too much commotion. The town was quiet for a few days (like normal) and then a solid but not overwhelming 4th of July crowd moved in for this weekend. All very manageable, especially compared to last summer. Very few people are wearing masks both outside and inside. There is a modest level of stupid behavior which is always to be expected. All quite civilized for a busy Mammoth summer, so far. There was absolutely perfect weather for the parade.
The Mammoth region experienced some intense lightning storms this past week including some “gully washer” rain events. All very welcome after a dry winter. The lightning caused numerous small spot fires that crews efficiently extinguished. A lone fire suppression helicopter based at Mammoth Airport has been working in the back country. The rain and cooler temperatures have greened the region nicely. The lightning and subsequent power outage wreaked havoc on my office electronics. It is amazing how dependent the real estate industry is on technology. Even the iPhone app that opens our lockboxes via wifi was compromised.
Higher lodging and gas prices may be affecting the level of tourism, and many are hoping it lasts the entire summer. As of June 30, campfire restrictions are at an extreme level –– no campfires allowed on Forest Service Land until November 30. Campfires are allowed in the Inyo National Forest developed campgrounds and there is public pressure to end that. There is No Smoking allowed unless inside an enclosed vehicle (gag, but I assume vaping is okay?). There are citizen patrols now looking for illegal campfires and campers leaving trash behind. And now the Mammoth Police Dept. has a fancy new off-road vehicle (Razor) for patrolling the dispersed camping areas. And 90 degree temperatures are in the local forecast for next weekend.
An increasing number of regular summer events are quickly coming back to the calendar. Basic infrastructure items are being delivered to the “Woods Site” where Bluesapalozza and other events are normally held. Visitors should be checking all of the various websites for the latest details. The Sheet too. Mammoth Brewing has constructed a small stage adjacent to their outside seating and has been having live music. And an increasing number of events are likely to be planned in the Village plaza. It is also increasingly visible that many businesses are short employees. Visitors will have to be patient with all levels of the service sector.
Regular commercial air service to Eastern Sierra Regional Airport aka Bishop Airport is looking more-and-more likely later this year. The Inyo County Supervisors approved the purchase of a 50″ X 60″ sprung structure similar to the one at Mammoth Airport as a temporary terminal. (Experience has shown us that the words “sprung” and “temporary” should never be used together.) Also, past United Airlines employees from Mammoth Airport report that they are being prepared for Bishop-based air service coming in the fall. So far there are no reports of any established transit from Bishop to Mammoth other than regular private tax service. But I’m sure this is on the agenda of the broad-based  Eastern Sierra Transit (the local public transportation agency).
The public agendas remain rather uneventful. Construction of the new ice rink facility is ongoing with large amounts of steel and rebar being delivered to the site in the past week. I had a lengthy Real Estate Q&A run in The Sheet this week. For now Mammoth is functioning nicely, let’s try to keep it this way.

The sale of a 2 bedroom / 2 bath unit at Sunstone for only $615,000. This may have been a great buy. Even though it was in original condition it had an incredible view. The Sunstone project has historically sold for more than Juniper Springs Lodge because it has conventional financing (Fannie Mae) available. Sunstone is very well managed and very well funded. A true ski-in ski-out property. Fantastic common area hearth room.
A premier lot in The Bluffs closed for $825,000. Another one listed at $1,495,000 went to escrow in the period. Even with construction costs so high there has been amazing vacant lot activity in the past 13 months.
A large home in on a spectacular lot in Old Mammoth closed for $2,400,000. This 30-year old home was dated and sat on the market last summer. The seller replaced the roof and the “pool table green” carpet with plank flooring and it sold quickly.
A large modified gambrel home in the Slopes closed for $1,150,000. This is a perfect example of the “buy anything” mentality in this segment of the market. Sold by an out-of-area broker. I wonder if he even noticed it was a gambrel?? 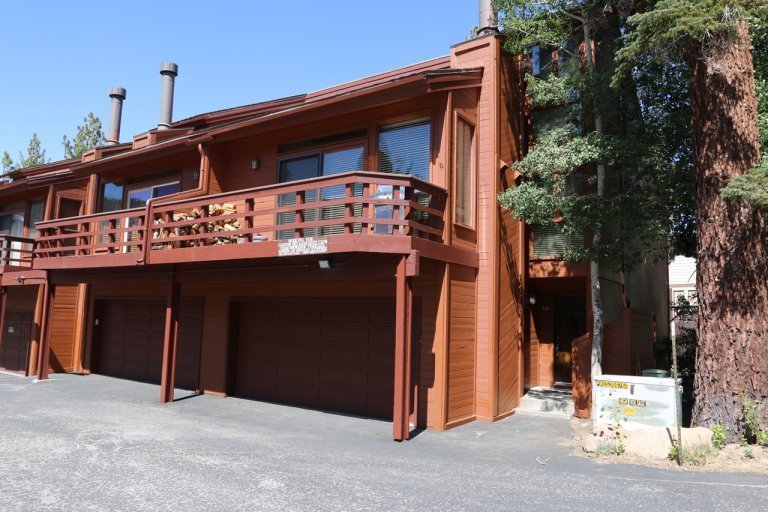 Large condominium townhome floor plans have been strong sellers all around town in the past 13 months. Units with golf course locations have increased substantially in value. But there are very few opportunities to own a large townhome within very close proximity to the Village. Here’s one. This is a 3 bedroom + loft / 3 bath / 2-car private garage unit at Canyon Ski & Racquet Club. This is an easy walk to the Village (Gondola) and has a Blue Line shuttle stop right at the project’s driveway. Well-maintained project with low HOA fees and good reserves. These units have one of the nicest lofts in all of the Mammoth floor plans. Quality construction from the early 1980s. Granite and marble counter tops. Good storage with large pantry, large closets in all the bedrooms, two linen closets, under stair storage and more. This could be an easy remodel or major renovation project. Or just leave it the way it is. Fantastic STR potential. Check out the video tour.
Listed at $1,179,000

Comparing the current Mammoth real estate selling prices/values to those from the ~2006 era is becoming a fascinating study.  Different segments of the market have very different comparisons. Some segments, including many older condos, are up significantly. Others actually remain below the peak values of 15 years ago. Trying to make the connection for the differences is a new study and these comparisons are bound to become a regular discussion of this newsletter in the coming months.

The Mono County Assessor pegs the spring of 2006 as the last peak of the real estate market. In reality the summer of 2005 was flat and it looked like it was going to be the peak. In October of 2005 there was an announcement that Starwood Capital Group and Barry Sternlicht (of Starwood Hotel and “heavenly bed” fame) had purchased the majority of Mammoth Mountain’s assets. The local real estate market immediately went nuts. Values rose another 10-15% into the spring of 2006. There were sporadic high sales into 2007 as the prospects for Mammoth’s future were bright. Then 2008 came.

All of the above are ~50-year old properties and 15 years older. Interesting.

The single family residence market is more apples to oranges for comparison sake, but a beautiful Rosassen built home in Starwood just went to escrow in the $2.8M range. Same home and basically the same furnishings closed in January of 2019 for $2,050,000.