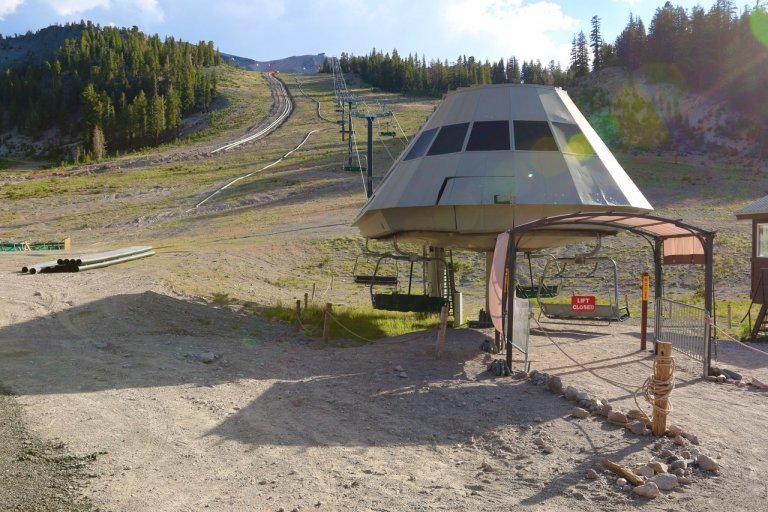 The Mammoth Lakes MLS is reporting 13 real estate closings for the period ranging from a low of $300,000 to a high of $3,300,000. Of the 13 closings, 12 were financeable properties and eight (8) were closed with financing. The closings remain consistent in the past two months including sales through the whole range of the market. The high sale of the period was a cash purchase.
The 10-year Treasury yield closed the period up substantially to 3.321%. Mortgage rates moved upward equally. All of the volatility has been anticipated. Standard conventional mortgage rates are sitting just below 6% but Mammoth second home and investment (potential) buyers are being quoted in the 7% range. Double from just a few months ago. Buyers are now looking at 7/1 and 10/1 ARM options and paying extra points to buy down loan rates. The industry blamed the rise in bond yields to the “drying up of liquidity” — dollars simply leaving the bond market. But Bloomberg reported that major corporations are in the process of issuing $10s of billions in new corporate bonds and money is flowing there, obviously looking for higher yields. This time last year the 10-year yield was 1.37%. Amazing.

At the period’s end the condominium inventory is down five (5) to 59. The total inventory dipped below that number during the past week, but a few new listings in recent days pushed it back up.  There were 11 new condo listings in the period and one (1) has already gone to escrow. There were six (6) price reductions in the period. Snowcreek properties have been the hottest sellers the past two years. There are now 11 Snowcreek properties on the market, and an interesting mix of floor plans. There are 16 condos listed under $500,000 and that includes two deed restricted units (workforce housing). This time last year the condo inventory was at 29.

The inventory of single-family homes is down five (5) to 22. This segment of the market saw several listing cancellations/withdrawns. This is an example of my old saying that Mammoth is a “don’t have to buy, don’t have to sell market place.”  A handful of new listings are offering seller financing. This would be an interesting trend (reminiscent of the late 1990s). The period also saw some seriously “low ball” offers. One I was involved with actually worked. One thing of note; the California Association of Realtors most recent offer/purchase agreement form has something new. There is a sentence now that states “Seller has no obligation to respond to an offer made”. This is a great addition. This time last year the single-family inventory was at 24.

The total number of properties in “pending” (under contract) in Mammoth Lakes is even at 59 at period’s end.  The total number of pendings in the aggregate Mammoth MLS (which includes outlying areas) is down four (4) to 88. This time last year it was 90 and 140  respectively. The post Labor Day real estate market is always the “march to the holidays” as buyers look to secure their new winter oriented property. And STRs for prime rental season. We’ll see how the coming months pan out. There might be significant exhaustion in the market. And higher interest rates aren’t helping. But it is surprising what a couple of early snowstorms can do.

Tourism remained strong in the region through the whole period. The SoCal heat wave drove many people to the High Sierra for a respite. Labor Day weekend was packed and this weekend was the popular Gran Fondo bike race and some kind of dune buggy confab. There were “Burners” traveling through the area this past week, but in past years the local law enforcement seemed keen on pulling them over on Hwy. 395. It was actually surprising to see them coming through, but I know some of them were renting local STRs and playing tourist.

The weather cooperated for the Gran Fondo with cooler temperatures. The major race of over 100 miles goes out to the east towards Benton and the recent heat wave would have made it insufferable. There has been a little smoke in-and-out the past few days and rain in the last 36 hours washed it away. Mammoth has thankfully been spared heavy smoke the entire summer. Cooler temperatures are in the forecast.

The workforce housing units at The Parcel will see accelerated construction in the coming weeks. The foundations are just about finished and now pre-constructed modules built in Idaho will start flowing into town. The modules will be delivered and staged at a new site at the Mammoth Airport, and then delivered to the construction site. This process was how the YotePad construction was proposed. The workforce housing along Old Mammoth Road (Aspen Village) next to the Snowcreek Athletic Club was also constructed this way.

Speaking of workforce housing, the old 238 Sierra Manor Road commercial building is now named Access Apartments. Mammoth Lakes Housing has a new $6 million grant for the renovation and is raising another $2 million. So $8 million for 11 new  1 bedroom apartments with garages. Do the math. They are going to be more expensive than similar sized units at the Westin Monache. Regardless, the property is an eyesore and this renovation is welcome.

The current capital improvements on the Ski Area are actually impressive. They are laying down some work before replacing Chairs 1 and 16 next summer. They are replacing extensive snowmaking supply lines (down Stump Alley in the photo above). The popular Mill is being expanded. But based on the ongoing work at Wooly’s Tube Park, this is going to become a major attraction. It looks like the actual “run” will be significantly longer than in the past. This should be ready for winter.

The construction work at the Limelight is also full bore. They were pouring concrete at the site this past week. The Ice Rink construction looks stalled. The rumor is there is “no way” it will be open in December as planned.

Meanwhile, I had a Mammoth Real Estate Q&A column titled The Great Mammoth Reset?? run in The Sheet last weekend. One local real estate agent came in the office to thank me for the column — it helped him get a buyer into escrow. 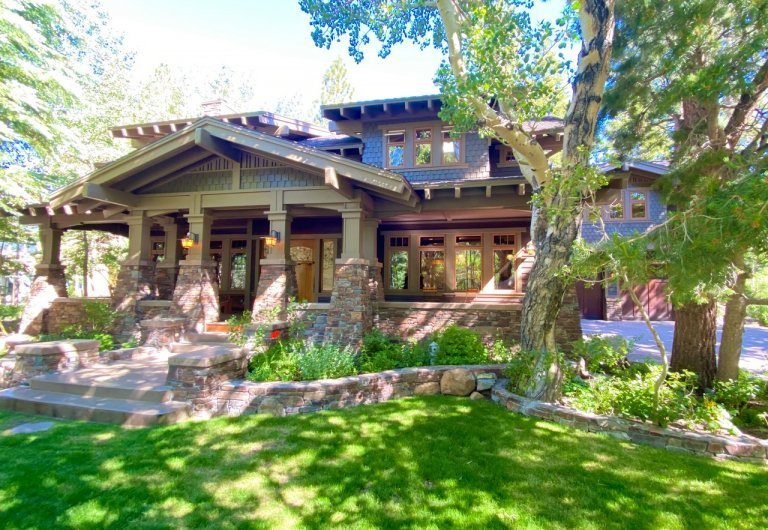 A major price reduction makes this a new listing for me. This is an impeccable luxury home in the Greene and Greene architectural style. Located in one of Mammoth’s best locations (private cul-de-sac and gated community). This is 4 bedrooms plus loft and 4 baths plus a large office. Over 4600 square feet of perfect detail and maintenance. Built by one of Mammoth’s finest contractors. Fabulous setting and mature landscaping. This is a Mammoth masterpiece. Built in 2003 and irreplaceable in today’s construction environment. Shown by appointment only. Check out the virtual tour.

A reader ask me about some of the transactions I’ve been involved with in the Mono Basin. For some inexplicable reason I have had gravitational pull into this micro real estate market. It has been an interesting experience to say the least. These properties include the infamous “Cunningham” parcel (~100 acres) which was the number one Forest Service exchange piece for the Main Lodge property, the Mono Inn, the Tioga Lodge property, the 880 acres in the Bodie Hills, the 10 acres on the western shore recently purchased by the Mono Lake Committee, currently the Tioga Gas Mart Complex, and others.

I find a great percentage of the SoCal based second homeowners and visitors do not go any further north than June Lake, or maybe Yosemite, while exploring this region. That’s a shame. Through my dealings in the Mono Basin, and including Bodie (a State Park), I have been uniquely introduced to some of the rich history of the local Native Americans (most of the local history books refer to them as Indians). And the Wild West/gold mining history. Mark Twain himself spent considerable time in the area. He initially thought it was a dismal place but discovered the redeeming qualities.

Highway 120 is the east entrance to Yosemite (where the Tioga Gas Mart is) and delivers visitors to popular the Tuolumne Meadows area of Yosemite. The origin of this route was the established path that the east slope and west slope Indians used in summer to trade, hunt, etc.. In the mid-1800s more pioneers came primarily attracted by gold mining. With the bustling Bodie on the east side and the many “49” mining camps on the west side, the route continuously expanded to what it is today.

I have been introduced to so many stories and multigenerational families in the region. A century ago, this area was substantially more occupied than Mammoth Lakes.  One of the fascinating aspects is all of the massive aqueduct tunneling that was built in the early 1900s by the Los Angeles Department of Water and Power. During much of the Great Depression there were large work camps for the construction of the massive aqueduct tunnel going from Grant Lake to Big Springs (the top of the Owens River).

These water diversions and the subsequent “draining” of the Lake ultimately led to establishment of the Mono Lake Committee and the legal challenges of the 1980s. After years of court proceedings, today there is a minimum Lake level established, essentially “saving” Mono Lake.

The Tioga Lodge was a bustling resort in the 1930s to 50s. Ruby Cunningham built the resort on previously homesteaded property. The Lake was known for summer power boat races at the time (imagine that). The resort featured a white table cloth restaurant and bar on the lakeside of the highway that featured an all Chinese staff. Cloud-seeding and a subsequent, massive mudslide destroyed much of the resort in the 1950s. But a substantial part of it remains and is now under new ownership. It may go through a renaissance.

The listing of the Mono Inn some 15 years ago never produced a commission but it gave me the opportunity to stand in Ansel Adams’ personal dark room at his home in Carmel (then occupied by his son). Sometimes the best payment isn’t in dollars.

And then there are the Bodie Hills at the north end of the Mono Basin between the Lake and Bodie. This is a proposed Wilderness Area, and probably for good reason. My recent listing of the 880 acres of privately owned land was gobbled up quickly by a Land Trust. Ultimate protection of this area is desirable because there are known gold deposits in the area and the commercial miners would like to poke around.

The Mono Basin makes for a spectacular day trip out of Mammoth; hiking and cross country skiing opportunities, kayaking on the Lake during good weather especially when the mama gulls are out with their babies feeding on brine shrimp, mountain biking (especially the forest south of the lake), a quick trip up to Lundy Lake/Canyon, or even a stop at Mono Cone for an old fashion ice cream cone. There is plenty more to do. All with incredible scenic beauty.

An endless education about the region can be found at Mono Basin History Museum  and at the Mono Basin Scenic Area Visitor Center.

Both are highly recommended.